The first thing to be said about the movie Unplanned is the ridiculous rating.  There are no swear words, no violence, and though there is a lot of blood in parts of the movie, it’s no worse than your average PG-13 action film.  The rating is a joke and a testament to how stupid the MPAA is.

The movie is what you’d expect from a Christian film studio.  There is a lot of terrible acting from the supporting cast that can’t be blamed completely on the poorly written script.  I, myself, had been of the opinion that if you want Christian films, you are going to have to suffer through the horribleness of them all until they have the money to produce quality films. But the excellent script writing by Andrew Klavan and Ann McElhinney of Gosnell, along with the quality acting, obviously well directed movie that faced an equally uphill battle against the MPAA (though didn’t get the ridiculous rating) shows that QUALITY Christian movies can be made without sacrificing anything. 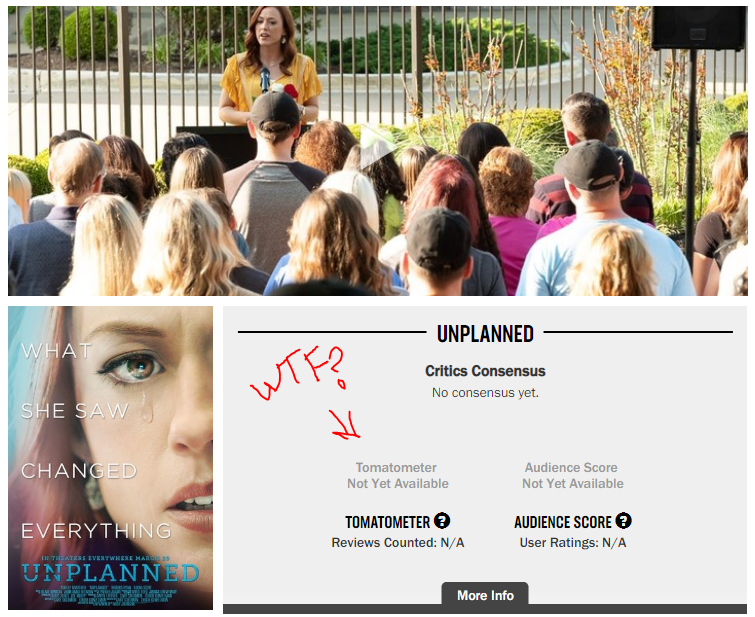 I am going to compare the two films without spoiling, because Gosnell is available on DVD/ digital download and the struggle to bring you THAT quality film and the ridiculous rating of the less than stellar, but still okay film, Unplanned is only more proof that Hollywood is an insular circle jerk that should probably die a quick, clean death on the pyre of an American Culture that has embraced alternative media sources (who unfortunately for now embrace the nepotism that originates in California).

Gosnell and Unplanned are both based on true stories.  Both movies have strong female leads who embrace the empowered language of feminism and are, undoubtedly early 3rd wave feminists. While Unplanned SHOWS you the recruitment of their heroine, Gosnell merely allows you to understand the heroine is a feminist by her actions.  Both movies show the struggle between being a mother and being the best qualified person in their career.  Of course, one is employed by Planned Parenthood and the other by a government legal office.  Both actresses are quality, but only one has a script and directors that can edit, direct, and bring out the best in the acting they had.  That wasn’t Unplanned.

The supporting cast of Gosnell was not only top notch, they were actors you will recognize from other works.  The supporting lines they gave not only pushed the story, but pushed the main characters (including our villan: Gosnell) to a higher ground. Unplanned suffered from poor acting by key supporting characters that contrasted too heavily in the scenes with their main, and very good actress, in ways that only made the contrast more apparent.  Gosnells supporting cast had important lines that were delivered with quality acting and directing, while Unplanned had hokey lines that were delivered in the way you’d expect a B Christian movie to deliver them.

Gosnell looked like a movie that belongs in a theater, and as such, the fight to keep it out of theaters was a horrible mark on our society as a whole.  This well made, true story is a must see ESPECIALLY now that we are having a debate about late term abortions.

Unplanned looked like a movie that belongs in a church, and the fight to keep viewers from seeing it with an R rating is absolutely ridiculous and inexcusable.  There are facts that anyone with an internet connection can find without a firewall and even with filters on their computer in the movie.  Fighting this basic, freely available information from getting to viewers when a company has spent the money to get it to a theater, only for the MPAA to try and sabotage it with a stupid rating, is not only UnAmerican, it is anti-intellectual.

If Christian directors and producers are going to continue to compete in the market, they need to step up to the quality writing as exemplified by Andrew Klavan & Ann McElhinney and the directing as exemplified by Nick Searcy, the completely awesome main protagonists Alexis ‘Lexy’ McGuire and Dean Cain, the equally quality antagonist Earl Billings.

I think Unplanned suffered from poor writing, though not like God’s Not Dead, which suffered from a sickly script and an obviously awesome cast.  The previously mentioned movie had a good cast, or at least the material to make it a better movie than it was.  I will recommend you see it in the theater only if you want to support Christian film.  If you don’t care, go rent Gosnell instead and watch the special features on the rental to see the REAL pictures of real abortions that got Unplanned (with fake pictures/etc) an unwarranted R rating.