When people first started binding books, just the name on the side of the book was something only a skilled craftsman could do, embossing or stamping the leather that was used as the cover.  But even the earliest books have decorative covers:

Illuminated texts like The Book of The Kells, might have given people the idea that color added to a cover would be even more attractive.  Binders added metal, enamel, and other objects to beautify covers:

But only the very rich could afford books like these.  Mass printing changed all that, however.  With the advent of the dime store novel, covers became an integral part of book sales. 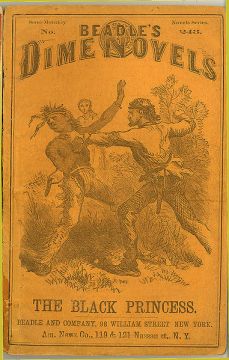 The market became more competetive and cover art became more important than ever.  The cover had to suck a reader in, give him a hint, but not too much of a hint, about the story, but most importantly, draw eyes away from other books.

Covers for adult novels became as important to novels as illustrations were for children’s books, and sometimes the artists that did them were the same.

You can almost trace the success of an author by the quality of their cover.  Tolkien started out with his own design when he was struggling to get his Lord of the Rings Trilogy out into the public:

But once the series became more popular, the cover became a lot more interesting.  A great site with the evolution of Tolkien’s book covers is: http://www.adazing.com/lord-of-the-rings-book-cover-designs/  You can see the waxing and waning of the popularity of Tolkien’s books by the covers alone.

A great cover can make or break a book.  Even a bad book can sell if it has a great cover.  Readers don’t just want a plain bound book anymore, it has to have an awesome jacket.  Some people even collect books for the artwork alone.  A great blog with some awesome scifi covers is:

And if you’re interested in having covers made for you, there is:

and check out my video!

2 thoughts on “Evolution of a Book Cover”